Sales Jobs in Finland: Are you the right candidate? 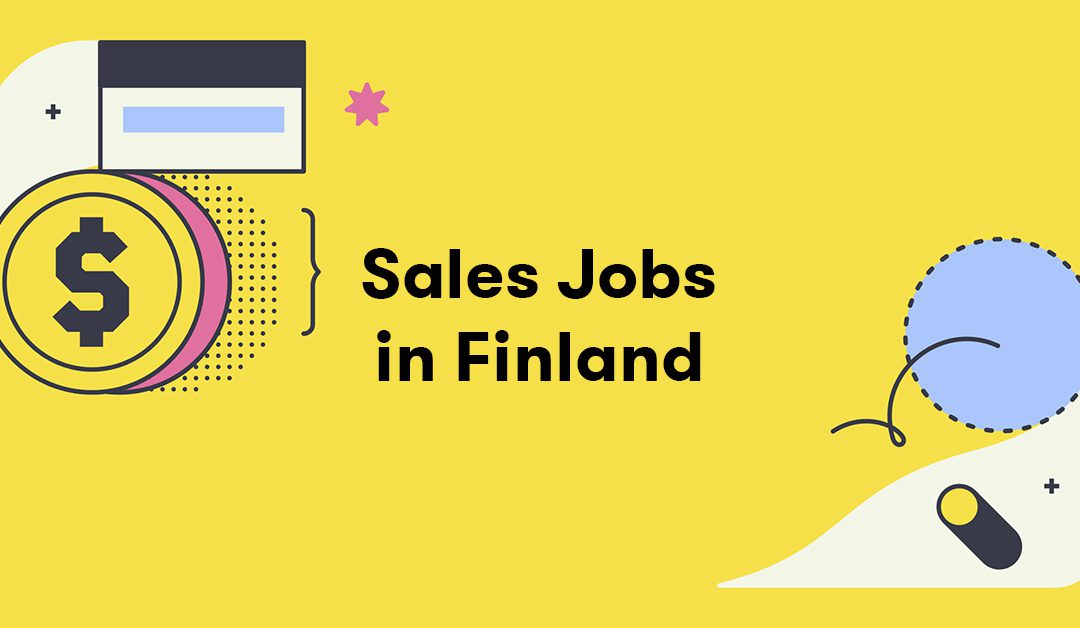 Here’s an interesting stat: only 39% of sales people ever intend to go into sales. For most of the rest, it was a second, third or even fourth calling.

If you’re a candidate for sales jobs in Finland, this stat is not meant to discourage you. Rather, it serves to show how few people consciously make the decision to join an industry where it can get difficult to perform well.

Think about this. According to Salesforce, 79% of marketing leads are never converted into sales. This means that you may spend more than two-thirds of your time chasing leads that will never convert. 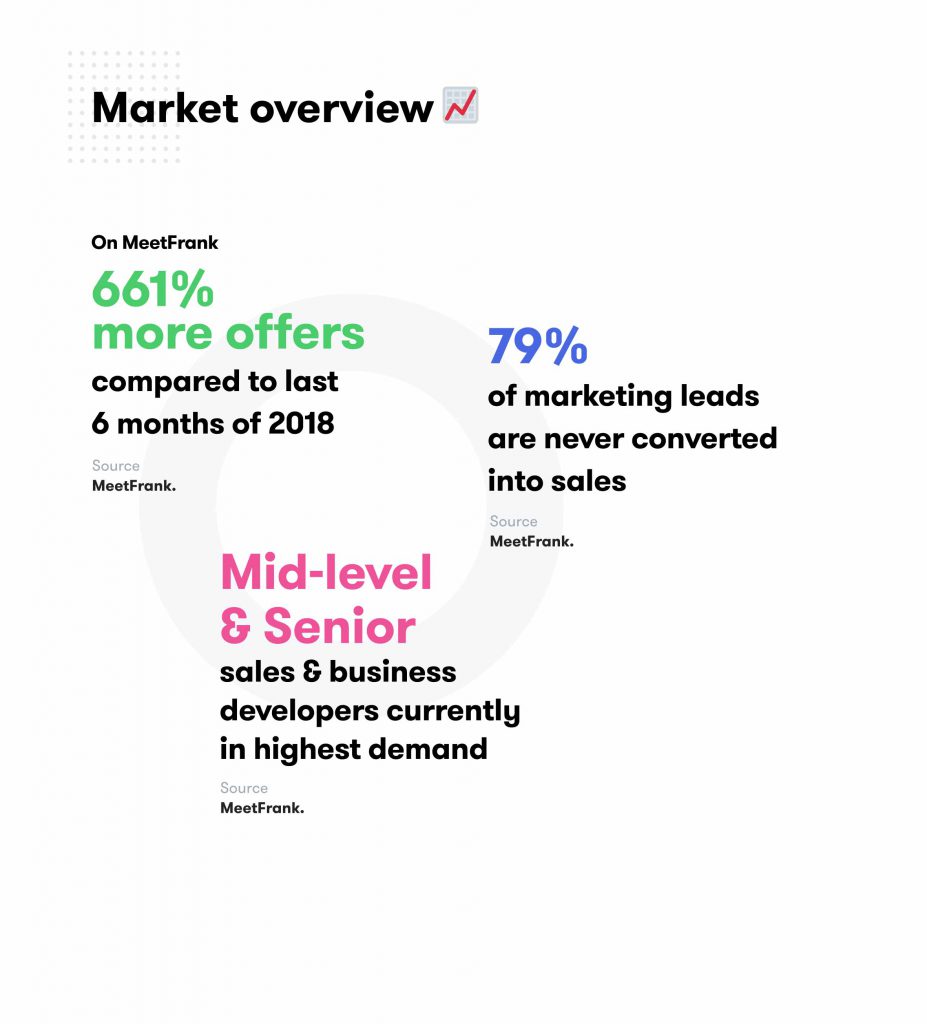 However, research also shows that those who take the time to get it right eventually make it big. For instance, Microsoft reports that 79% of sales people achieve their quota by using social selling techniques. So, if you want to make the most of sales jobs in Finland, you need to be aware of the key facts and stats that underpin the market.

In this article, we’ll share the stats we have on sales jobs in Finland with you. Some of these stats and facts were culled from our employment platform, MeetFrank, and cover the first 6 months of 2019.

Overview of the market for sales in Finland

Although the Finnish economy is still fighting its way out of hard times, it has noticeably improved recently. Its GDP grew by 2.6% in 2017, at a faster rate than all the other Nordic countries, and its GDP per capita was 36% above the EU average.

This has helped an increase in retail sales and consumer purchases across the country. Retail sales increased by 2.5% in 2017 and 3.9% in July of 2019. Retail consumption in the country is over 20% higher than that of the Eurozone, equal with Sweden’s and 6th overall in all of the EU.

The online retail sector has particularly enjoyed a lot of growth. In the B2C market, Finns spent about $9.6 billion on retail goods and services. 84% shop online, spending an average of $3,770 a year.

All indications show that Finns are not averse to spending. Retail accounts for 33% of total household expenditure in the country, and, when combined with food, beverage and leisure, it amounts to 40%.

Clearly, there are more than enough sales being made in Finland. The sticky point for companies though is getting a healthy share of the sales. That’s where candidates for sales jobs in Finland are expected to make the difference.

Customer facing roles have a tendency to require a lot from candidates. To excel in these roles, talent needs to be fluid in client interaction and accurately anticipate and meet needs.

Candidates that cannot do this may find things a bit difficult. Take this stat for instance. Blender reports that 65% of customers are lost because of indifference, not because of any mistakes on the part of the sales person.

This means that you could do everything right but still lose the customers because they simply do not “feel” the service. Hubspot research indicates that buyers expect sales persons to “listen to their needs”, “respond in a timely manner”, “provide relevant information” and not “be pushy”. 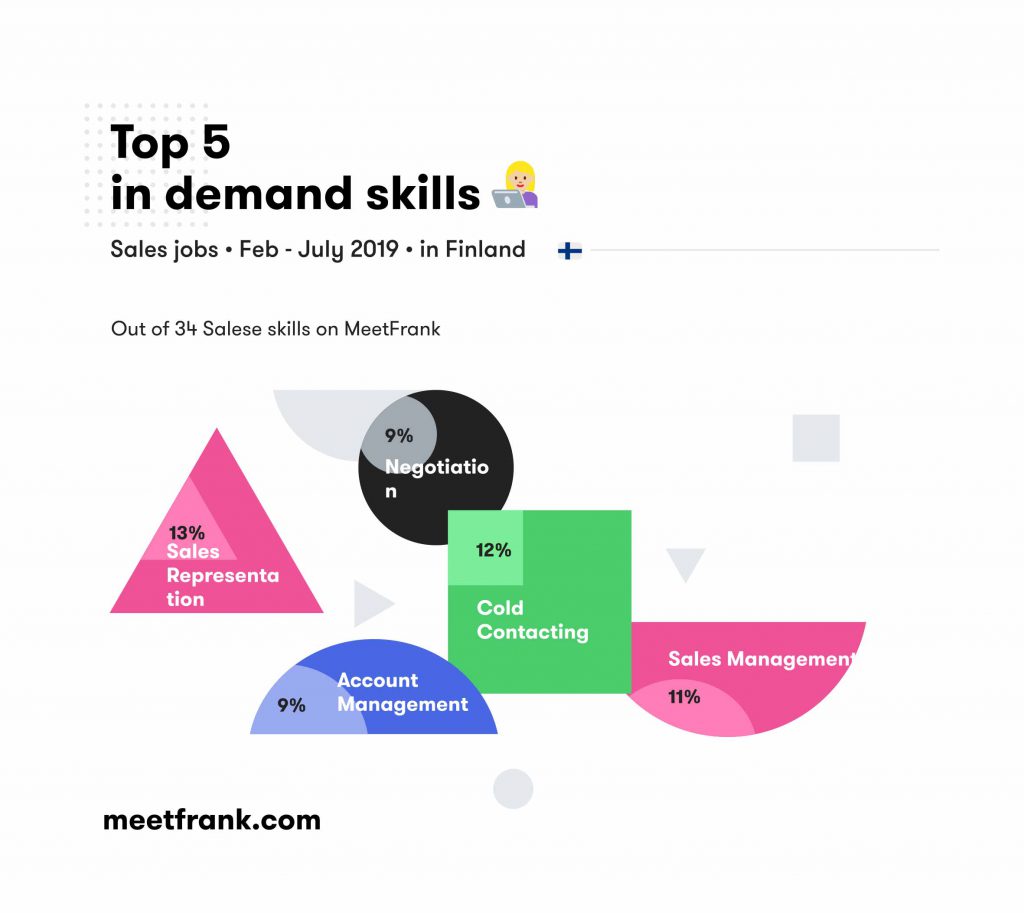 Companies also seem to think along these lines, as MeetFrank data indicates that sales representation was the most sought after skill in 2019, required in 13% of offers. Cold contacting, sales management, account management and negotiation made up the rest of the top 5 with 12%, 11%, 9% and 9% respectively.

The requirement for cold contacting and negotiation skills further indicate the premium that companies put on candidates that excel at customer relations. 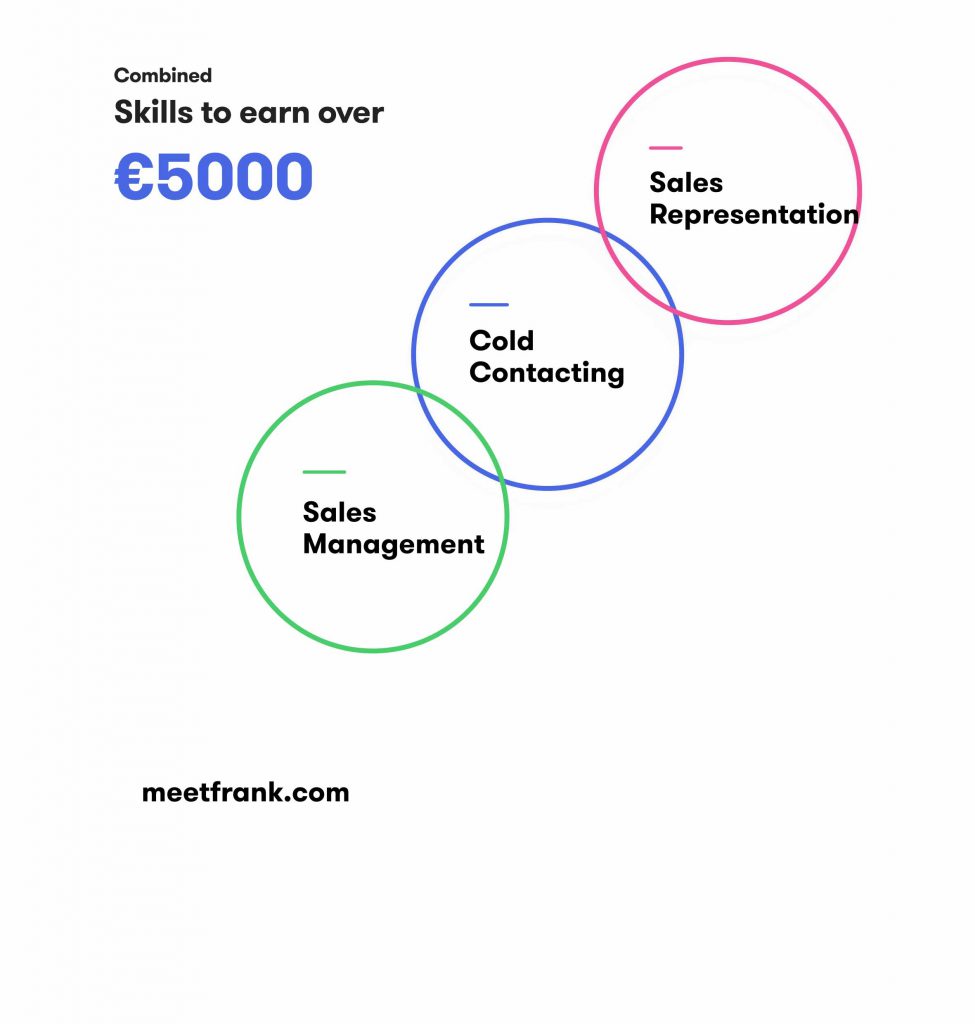 As more customers search for purchases that will deliver an engaging sales experience, it is expected that the importance of consumer interaction will only increase.

For the period between January and July 2019, companies were most interested in hiring mid-level sales reps. These candidates received the most offers during the period, followed closely by offers for senior sales and business developers.

In respect of offers for other positions, the market seemed fairly balanced. There were almost similar offers for well experienced reps and for candidates that are only just starting out on their careers. 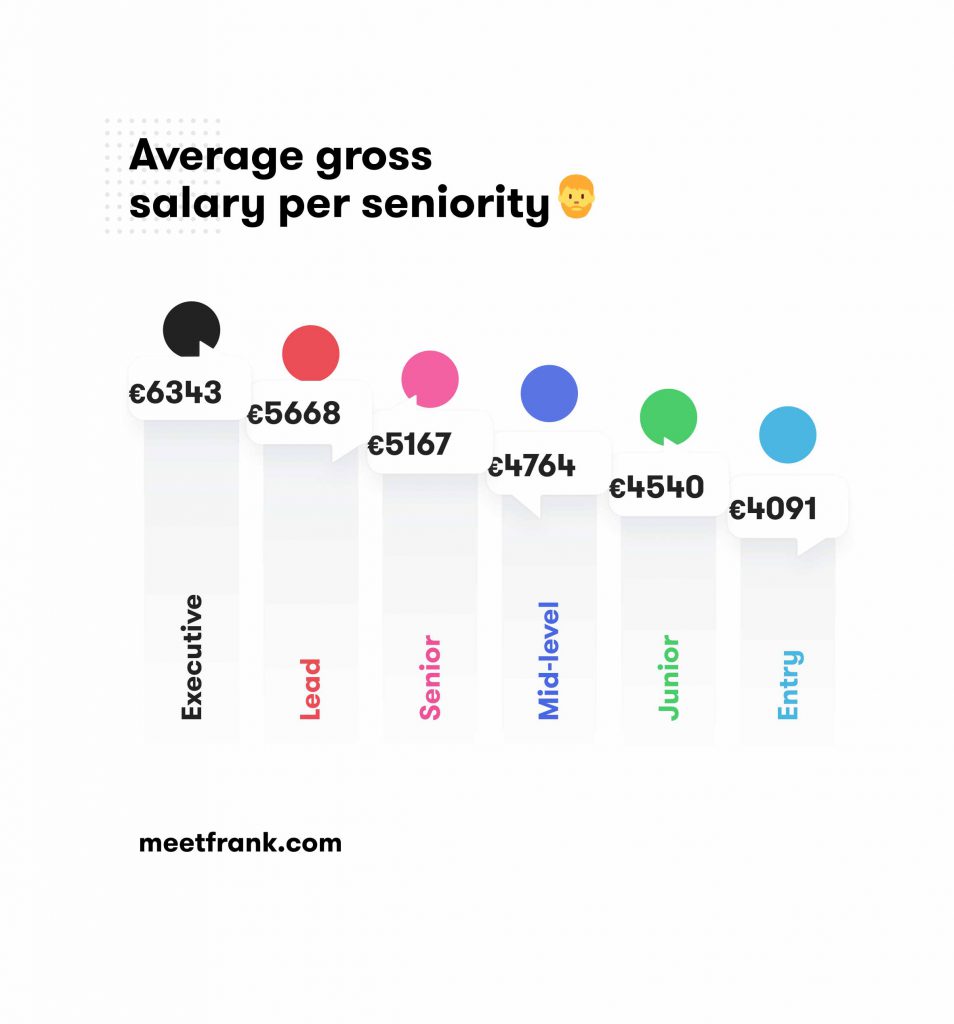 These candidates in entry roles received the 5th highest offers, with only candidates for executive roles receiving less offers. Lead and junior candidates were 4th and 3rd respectively.

The stats show the market is a pretty good one for fresh talent. The volume of offers for more experienced candidates also indicates that there may be some room for swift movement up the ladder for talented candidates.

Overall, salaries for sales jobs in Finland were good, over the first half of 2019. The average minimum salary during the period was €2,319 per month and the average maximum was €4,879.

During the period, the highest single salary for a position was €10,000. As you have seen, earning this much would require a mixture of some of the most relevant skills on the market. 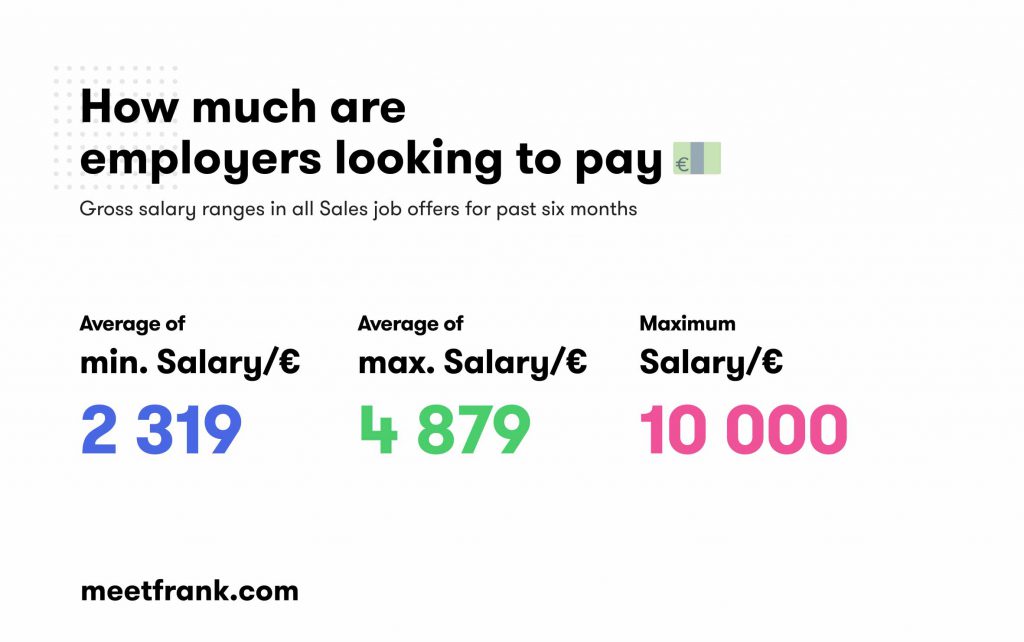 MeetFrank data shows that candidates that want to earn along these lines should have competencies in cold contacting, sales management and sales representation.

Average monthly salaries remained at a generally high level, starting out at its lowest of €3,075 in January and reaching a maximum of €5,300 in July. Interestingly, the figures show a departure from the characteristic slump in salaries usually experienced during the summer months.

Candidates in entry roles started out at average salaries of €4,091 per month and juniors at €4,540 on average. Seniors earned a monthly average of €5,167 but executives were the highest paid with salaries of €6,343 on average. 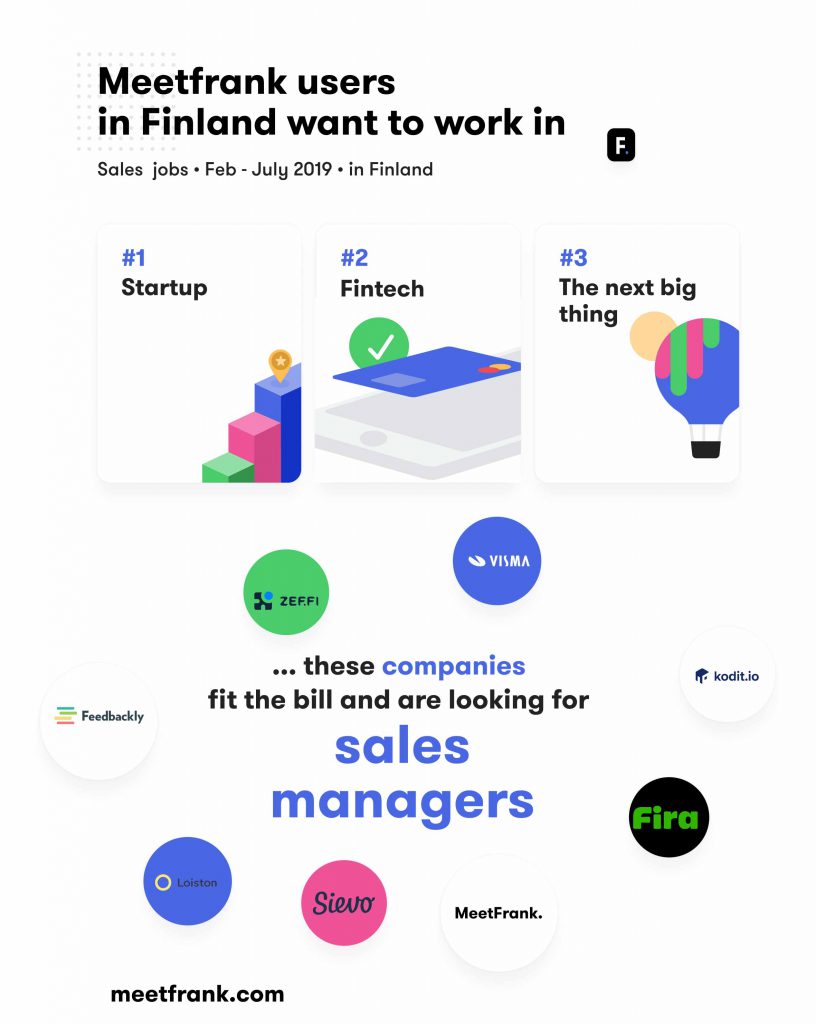 MeetFrank users in Finland are interested in sales jobs in Finland that can offer The Next Big Thing, startups and Fintech.

Companies that fit this description and that are also hiring for these jobs include MeetFrank, Feedbackly and Loiston. Others are Zeffi, Fira Group, Kodit and Sievo Oy. 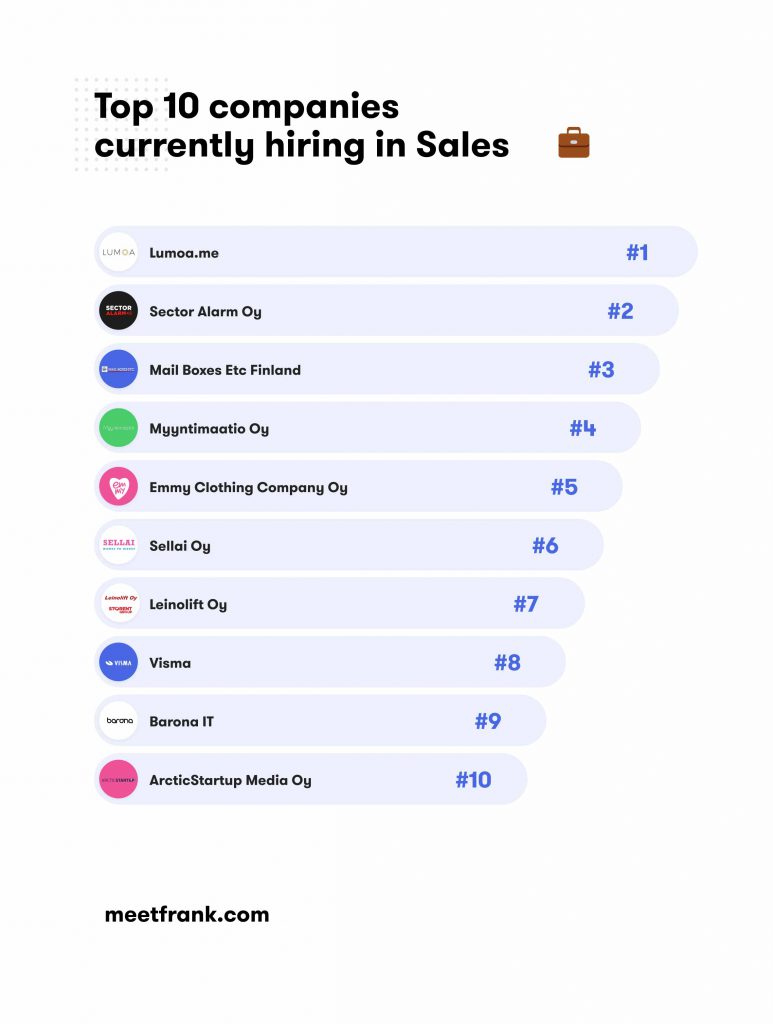 The companies doing the most hiring for sales jobs in Finland during the first half of 2019 include Lumoa.me, Sector Alarm Oy, Mail Boxes Etc Finland, Myyntimaatio Oy and Emmy Clothing Company Oy.

The rest of the top ten are Sellai Oy, Leinolift Oy, Visma, Barona IT and ArcticStartup Media Oy.

Find all you need on MeetFrank

MeetFrank is an app that democratises the job market. We make it easier for talent to find all the information that can guide them on their decisions regarding the market and job offers.

You don’t have drop off your CV a thousand times before you find the perfect workplace. Job hunting should not have to involve so much hunting. Download the app for Android and Apple to see what companies are interested in hiring you and what they have to offer.

MeetFrank is also made for companies that want to streamline their recruitment process to become more efficient and cost-effective. With MeetFrank, companies don’t have to spend so much time looking for the perfect candidate. We’ll bring them all to you. Schedule a demo call with us to see how the app works.