Data Science Jobs in Finland: ‘The sexiest job of the 21st century’ 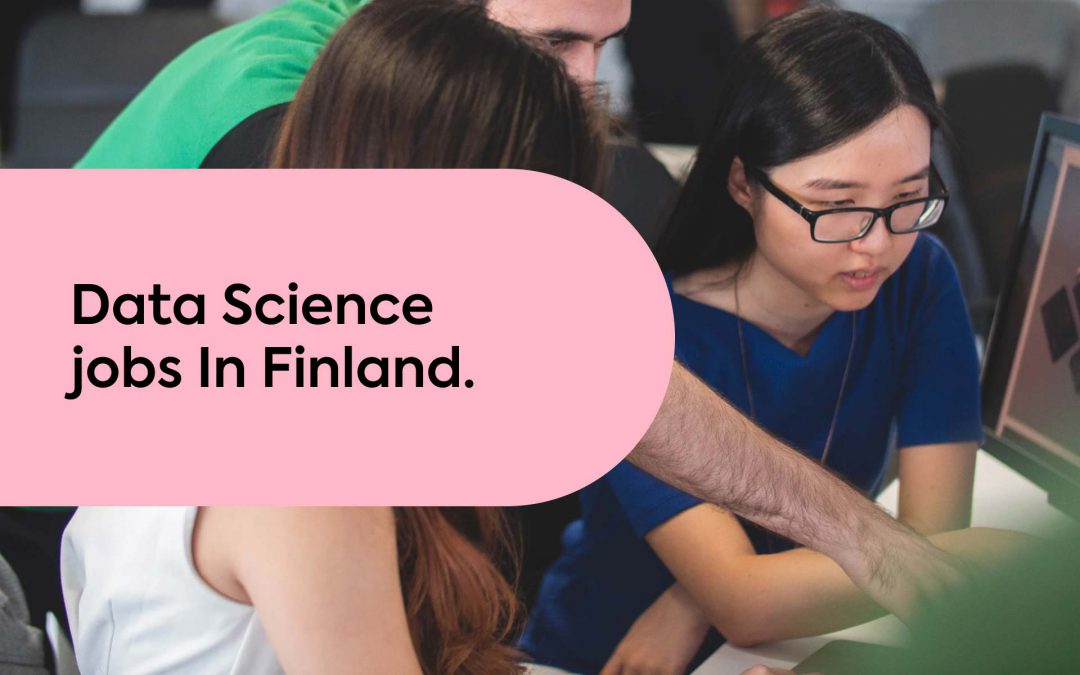 In 2012, when the Harvard Business Review described the job of a data scientist as ‘the sexiest job of the 21st century, they were only heralding what the world already knew. But it’s doubtful that even they could have anticipated the mad rush that has ensued for candidates in these roles since then.

As the constant, and almost feverish, demand for data scientists in recent times has shown, you can do a whole lot worse than decide to be a data scientist. Globally, there is an overwhelming demand for candidates in these roles, with McKinsey & Co predicting a global shortage of up to 1.5 million jobs in 2018.

And as you would guess, with great demand comes a potentially hefty pay packet and all the data to play with that you could possibly want. Considering the nice perks, data science jobs in Finland just may be the sexiest jobs around.

If you’re looking for the best tips on how to make headway in the sexiest job in the 21st century in one of the most stylish countries in the world, we have the stats and facts you’ll want to know.

Although, there’ll probably be more of data science and less of fashion in these stats, here’s what you should know about data science jobs in Finland.

Although it is one of the most stylish places in the world to live and work in, you’d be hard pressed to find anything sexy about data science jobs in Finland. That’s probably not how you thought we’ll begin this one, but there’s a consensus that being a data scientist is pretty tedious.

The typical data science professional spends their days crunching through seemingly endless reams of data. They’re either designing some new algorithm to make sense of the hordes of data or trying to convince the big boss why it’s significant that 70% of customers prefer a “howdy” to a “hello”. Not the most exciting stuff.

But what really gets the world (and employers) excited about data scientists is what they can make data do. Research giants like McKinsey report that Fortune 100 companies can bump up net income by $65 million just by increasing data accessibility by 10%.

It is estimated that the work of data scientists in data analytics can save the healthcare industry up to 17% of costs. That would have saved the industry a ridiculous $493 billion in 2013.

Finland has long harboured hopes of establishing itself as a world power in AI and data science. It signaled these intentions once again by launching its Artificial Intelligence Program in 2017.

With designs on becoming a leader in the application of AI, the country also established a Finnish Center for Artificial Intelligence (FCAI) and its Helsinki Center for Data Science. The FCAI is maintained by the University of Helsinki, Aalto University and the VTT Technical Research Center of Finland.

Both the University of Helsinki and Aalto University offer research and master’s programmes in data science. Finnish companies are also keenly interested in data science professionals, with startups such as Iris AI and The Curious AI Company operating on the cutting edge.

Do you have the right mix of skills for data science jobs in Finland?

More than many other jobs, data science jobs are very skill intensive. Top candidates are usually expected to possess several skills in addition to their primary area of study.

For instance, a background in statistics will need to be married with a firm command of at least one programming language, preferably python, and competency with some data science databases.

Some employers even go further in their search for top talent, preferring so-called T-shaped individuals – those with great analytics/technology skills and well-hones soft skills. However, considering the relatively small pool of talent to mine from, it goes without saying that employers hardly ever get everything they wish for in talent. 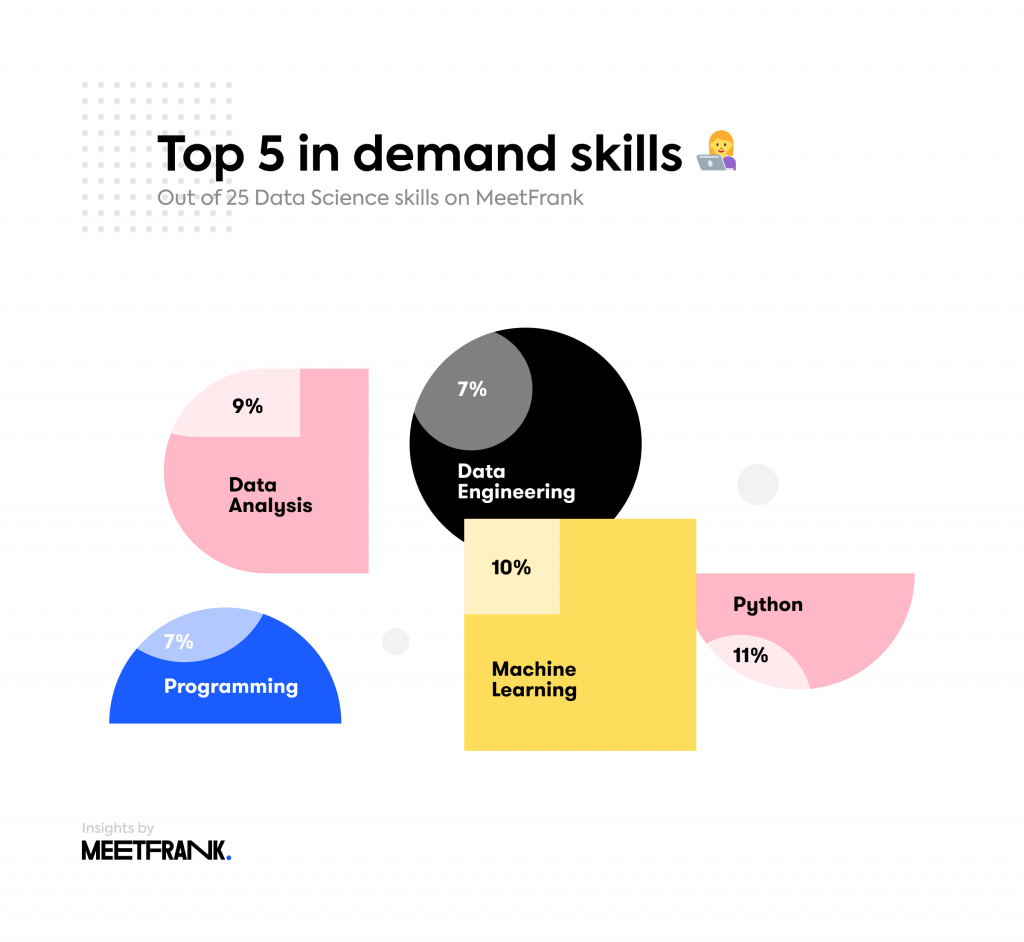 According to MeetFrank data, out of 25 skills generally required by employers for data science jobs in Finland, Python was the most in-demand skill. It was required in 11% of jobs offers made on the platform in the first half of 2019.

Machine learning was the second most in-demand skill, required in 10% of offers, while Data Analysis, Programming and Data Engineering made up the rest of the top five. They were required in 9%, 7% and 7% of offers respectively. 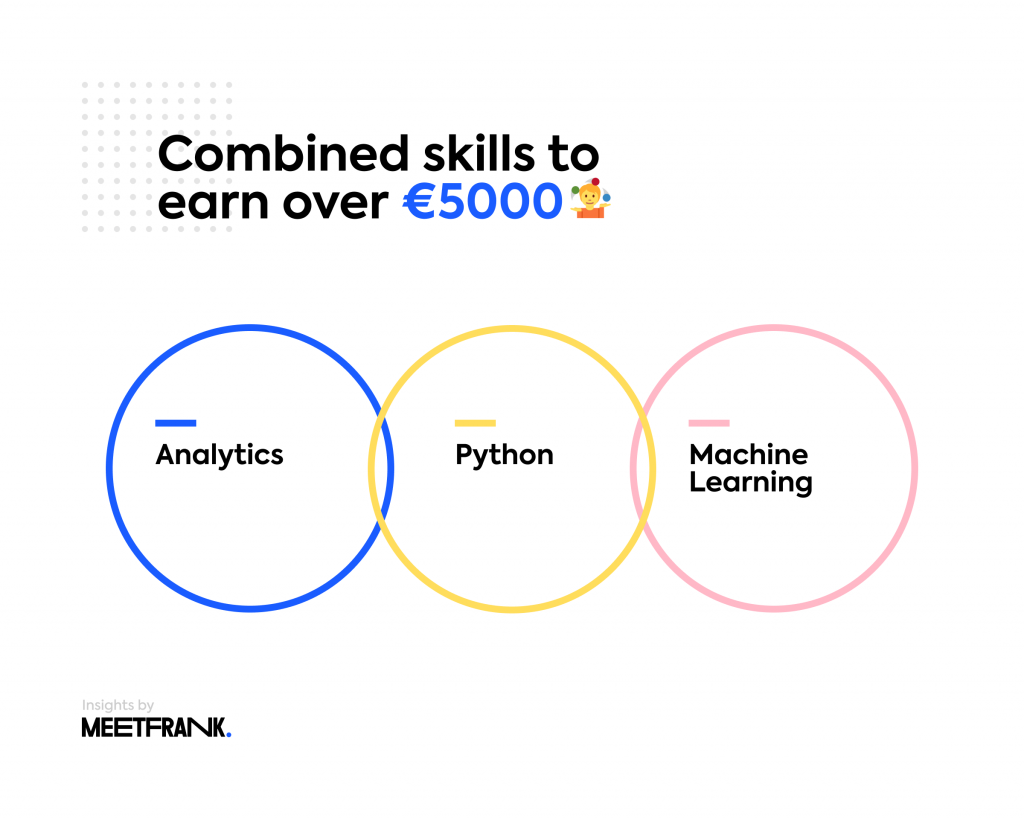 For candidates that want to make the most of their earning opportunity, the right combination of skills can make that dream a reality. Competence in Python, Machine Learning and Analytics can set you up for a monthly salary in excess of €5,000.

Who are companies looking to hire?

From MeetFrank data, the most offers in the first half of 2019 were made to lead and senior data science professionals. They were made an equal number of offers and were equally in demand during the period. 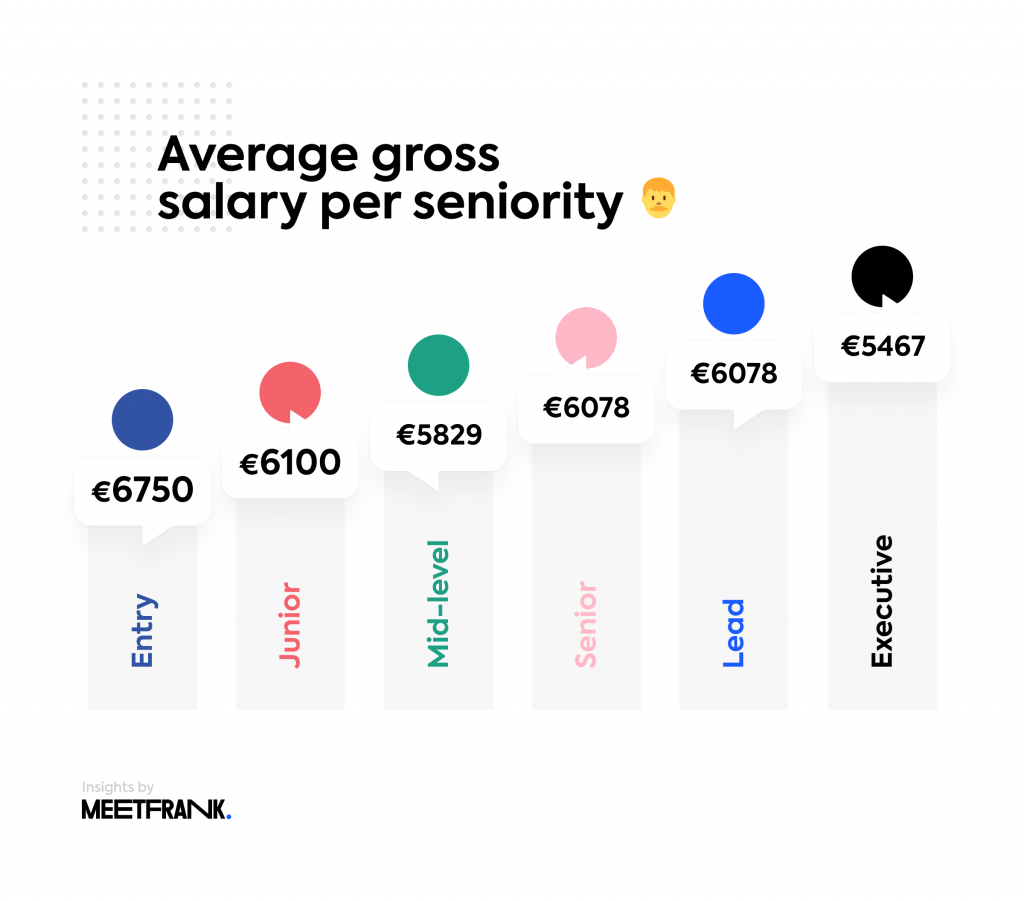 Offers for mid-level candidates were not far behind in second place, while the least offers were made for junior talent. However, as the data on average salaries will show, they must have been quite some talent. 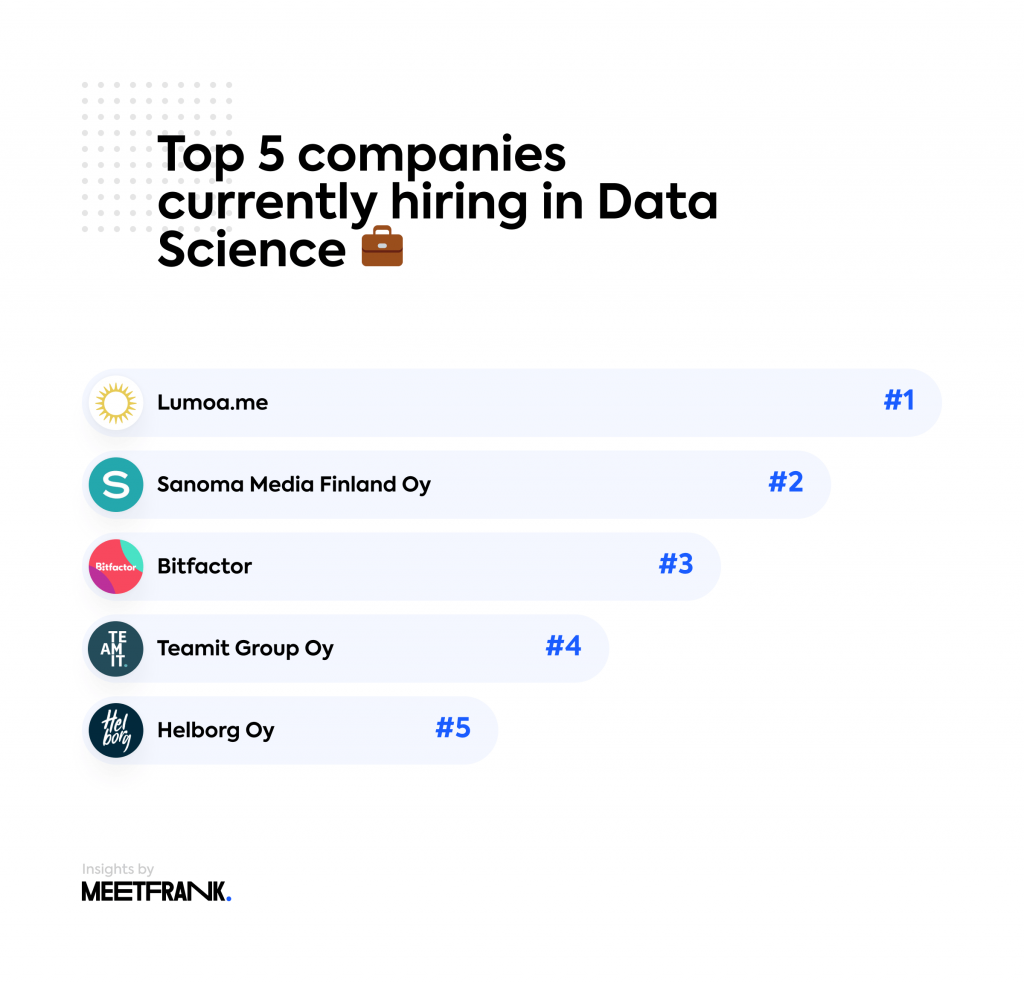 If you were still harbouring doubts about just how sexy data science jobs in Finland can be, we’re sure this data set will go some way towards easing your mind.

From MeetFrank data curated from job offers made on the platform between January to July 2019, we extrapolated our figures on average salaries for data science jobs in Finland. 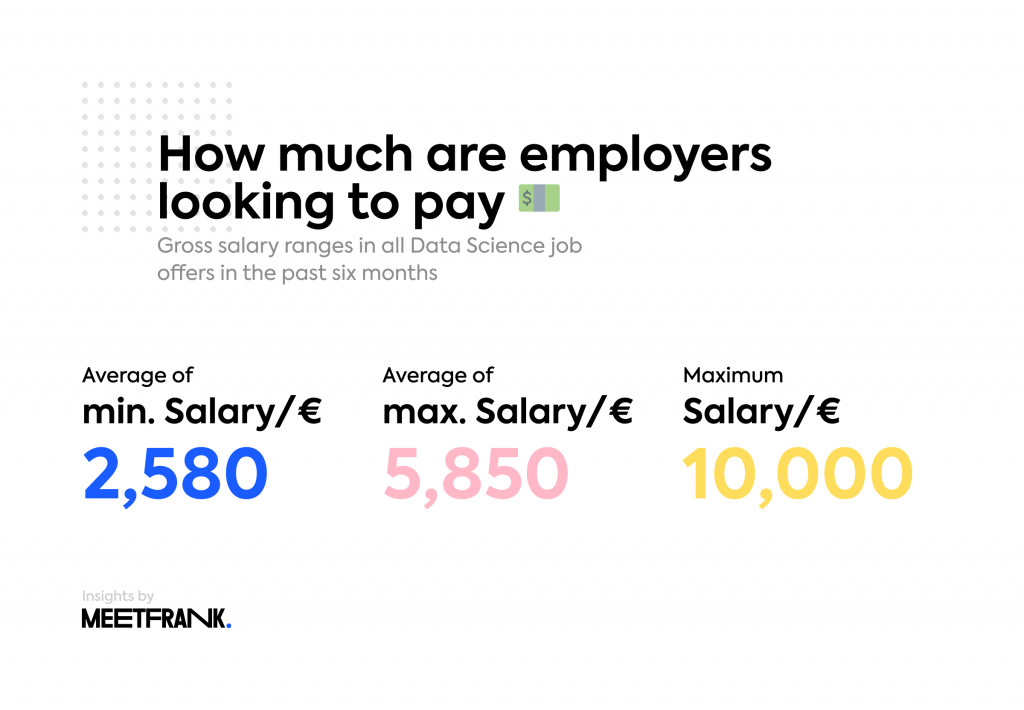 Overall averages for the period showed that average minimum salaries were €2,580 while the average of maximum salary was €5,850. The highest salary offer received during the period was an eye-watering €10,000. 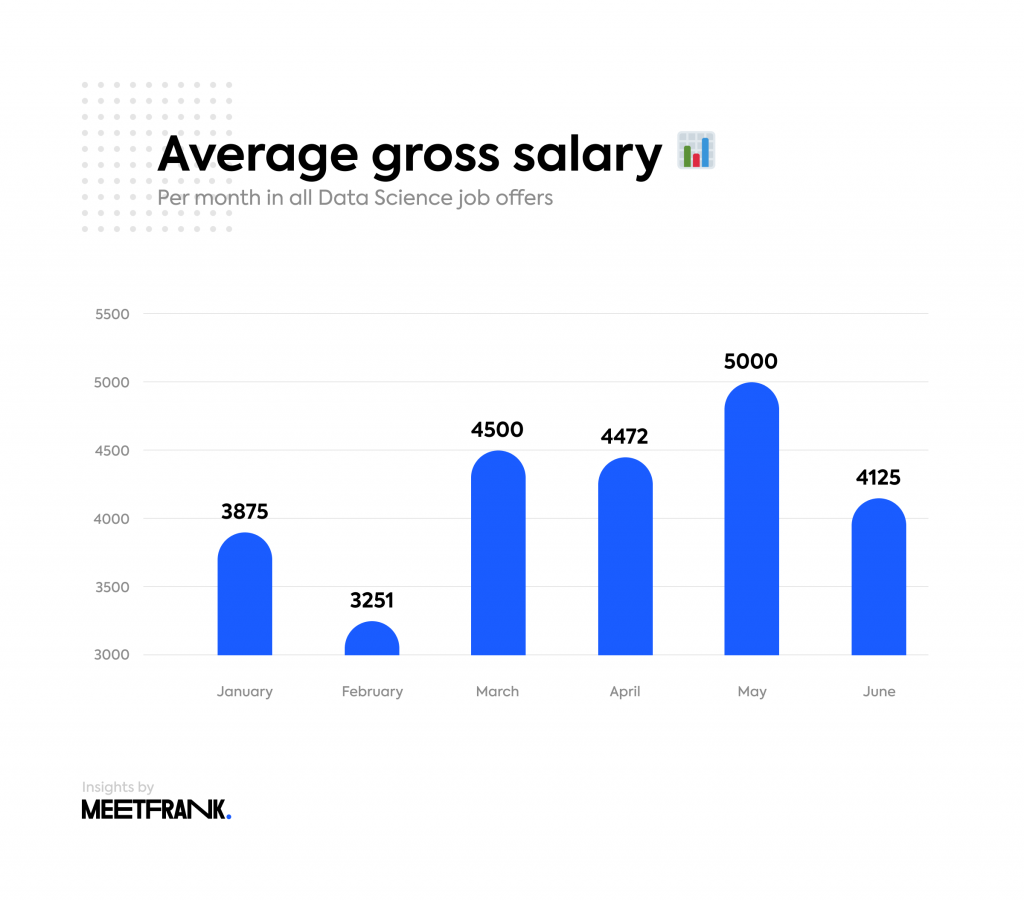 From month to month, the lowest average salary was €3,251, recorded in February, while the highest was €5,000, recorded in May.

The data shows very good trends for data scientist salaries in Finland, and reinforce why these jobs are in such high demand.

Data scientists are highly-sought after because they may hold the keys to the future we all want. That’s what makes them so valuable.

If you are one of this august pool of talent and you’d like to know what your chances are for data science jobs in Finland, or anywhere else, hop on the MeetFrank app. Try it on Apple or Android to see what companies are interested in hiring you.

The platform was also created to help recruiters make their jobs much easier. Use MeetFrank to find the exact right talent that your company wants. Contact us for a demo to see how MeetFrank works.