Ride the Tiger? The State of Estonian Job Market for Tech Roles in 2020 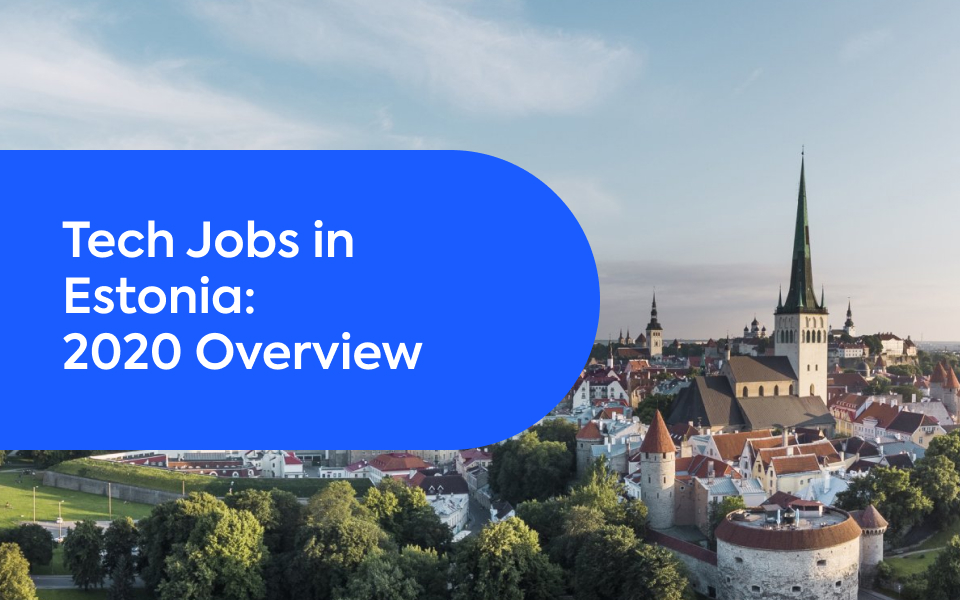 Having a reputation for punching above its weight when it comes to things digital and tech, the Estonian tech sector has been experiencing a solid-paced rise during the last five years.

But how does that affect the local job market?

Here are some of the takeaway facts we found out about Estonia’s job market: 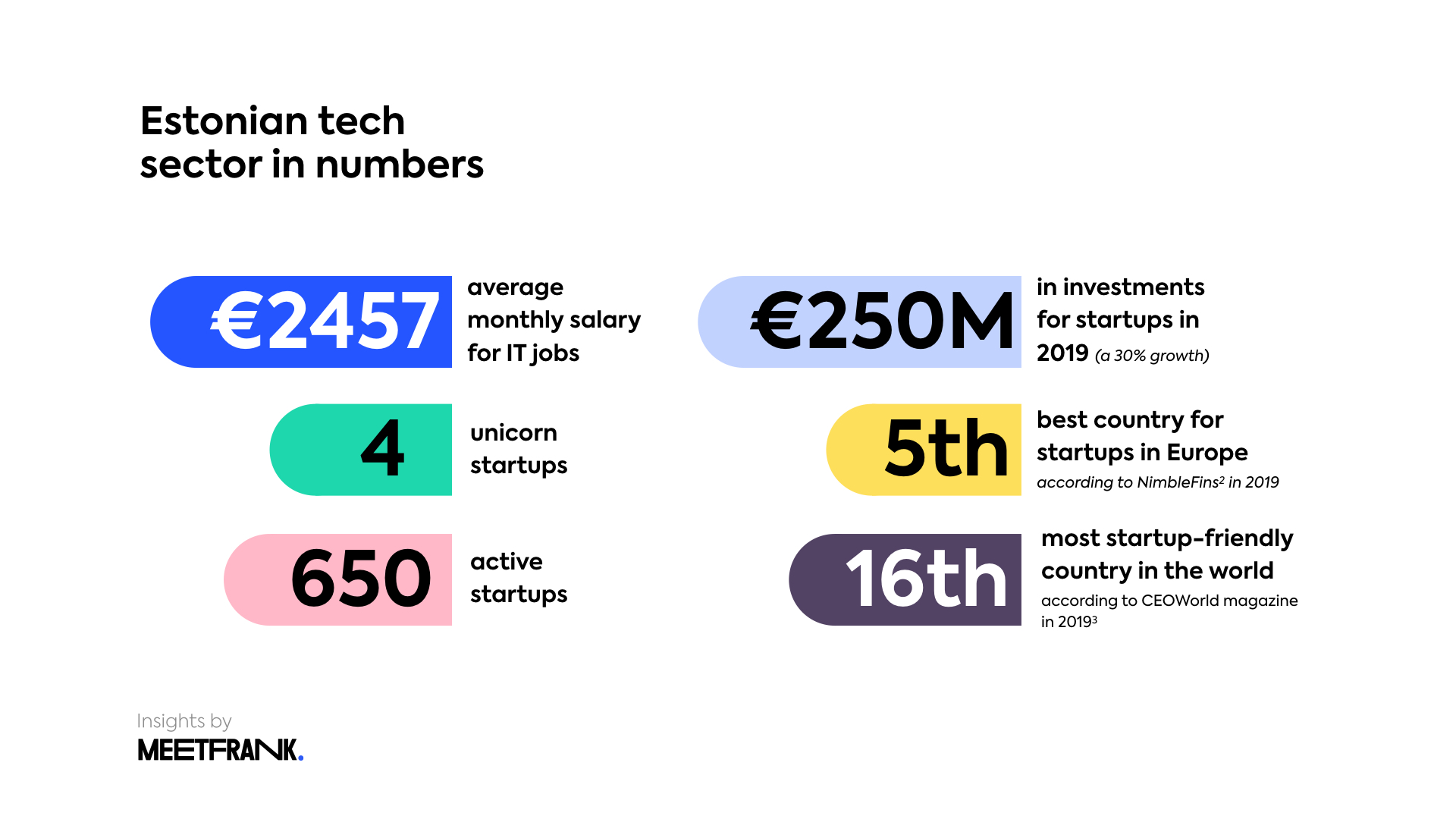 The tiger reference 🐯 in the title of this article is not a literary gimmick (not totally at least), as it’s referencing to the Tiger Leap project – one of the revolutionary initiatives launched by the Estonian government in 1990’s and 2000’s that paved way digital information technology. These programs played a fundamental role in the buildup of state information infrastructure and education.

It is also most likely one of the factors that have led to the considerable success of Estonia’s tech sector, that is currently growing at a fast pace and attracted a strong € 250 million worth of investments in 2019. The country is proud of its 4 unicorns, having currently more per capita than any other country in the world: Skype, Playtech, Transferwise and Bolt.

All this makes for good country promotion material, but what’s actually happening at the work market? 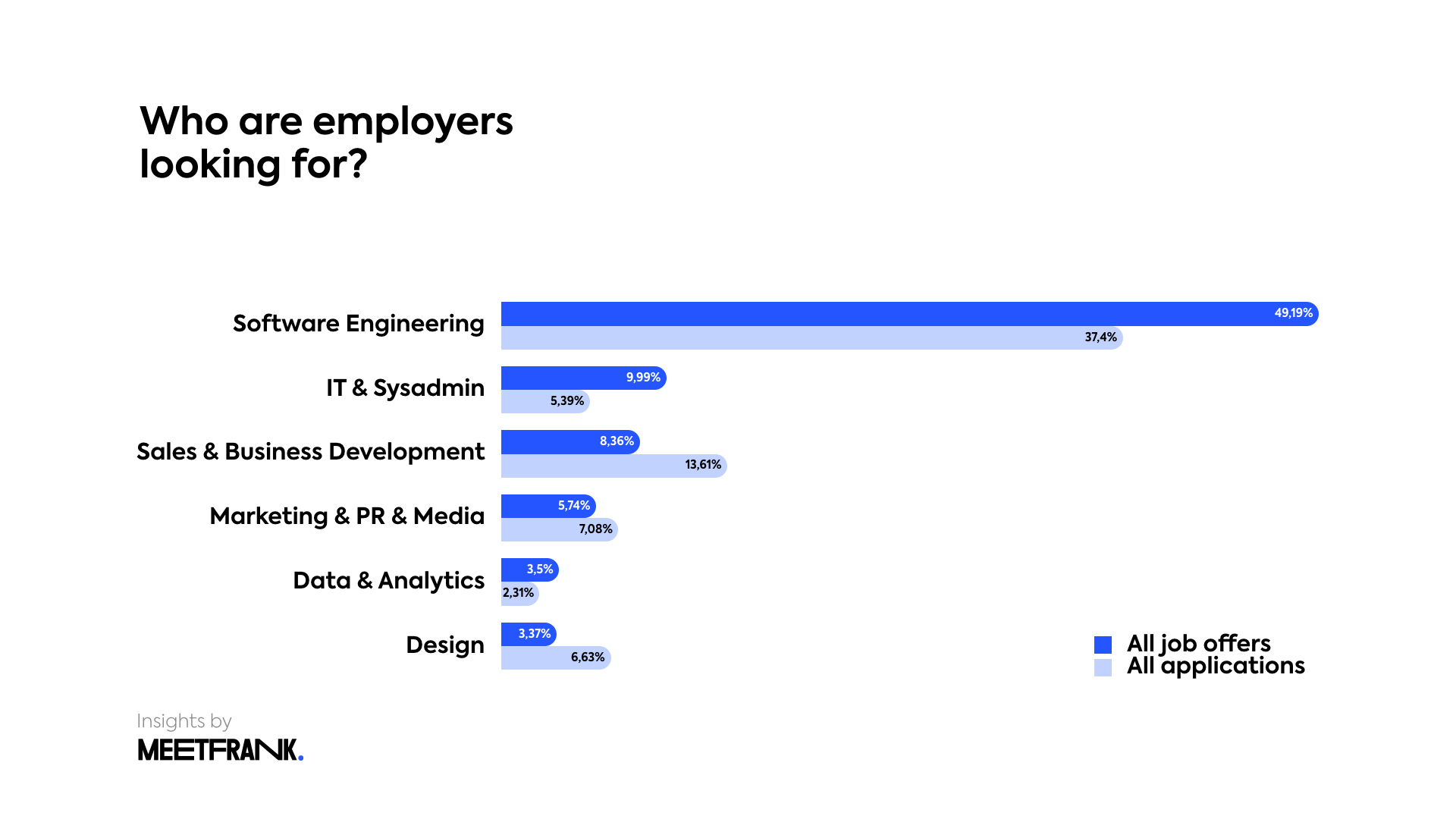 IT & System administrators are the second-highest in need and also with a low ratio of applicant numbers. Creative fields like design and marketing & PR are among the last in the top 6, with a negative ratio of the share of applications, indicating high competition.

Competitiveness for the top 6 roles 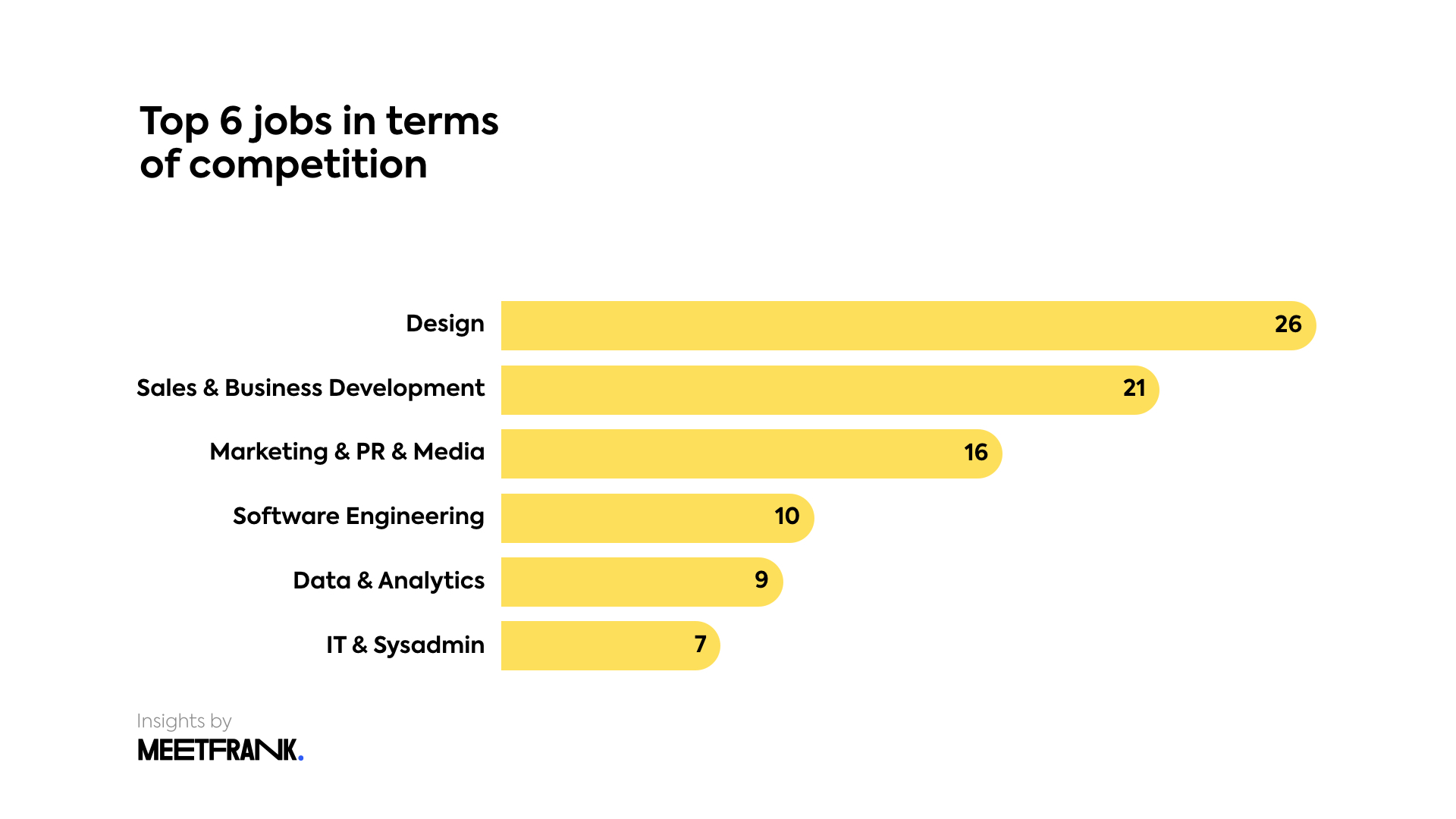 Among the six jobs with the highest share of offers in MeetFrank, creative and performance-oriented fields like design, sales & business development, marketing & PR & media see the biggest competition for the job offers in Estonia.

On average 26 people apply for design job offers published in MeetFrank, which is the highest in Estonia but far behind the European average of the same field – 41. Also similarly to the European average, IT fields are lower in terms of competition as, software engineering has 10, Data & Analytics has 9 and IT & Sysadmin has 7 candidates per offer.

What are the salaries for tech jobs in the Estonian job market? 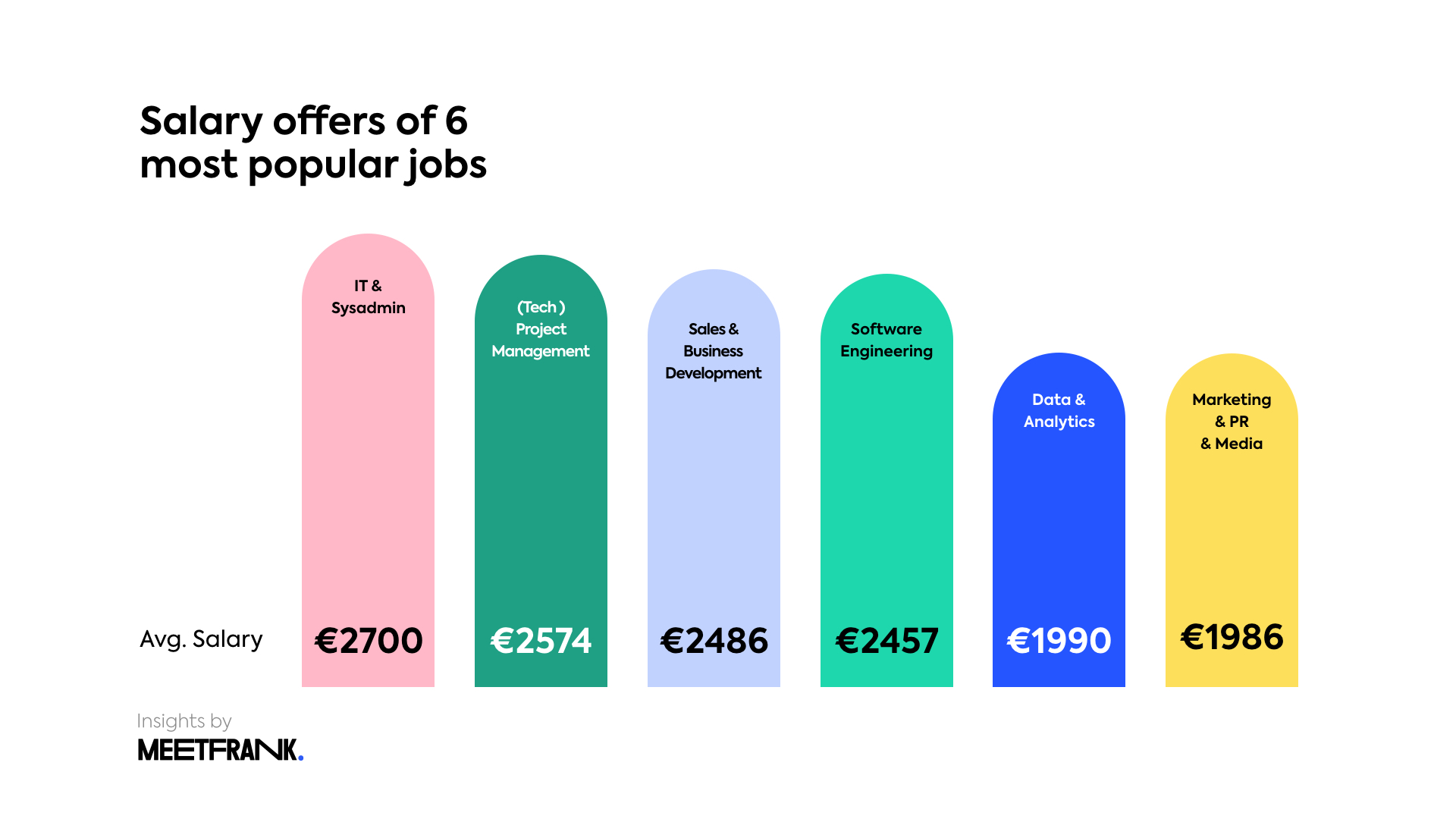 Although slightly behind the European average, it can be said that salaries offered in the tech sector in Estonia are relatively higher than those of the rest of the country.

Also, the payment is slightly more egalitarian in Estonia between the average payments in different fields as the tech/IT jobs are not that far ahead of the others than the European average is. IT & System administrators are the most well-paid among the most popular jobs, followed closely by project management, sales & business development and software engineering, while creative fields like design and marketing are earning about a fifth less.

As you scroll up, you will see that high demand creates high salaries: As software engineers are one of the most sought-after experts in Estonia, it also reflects in their salary level.

It’s a fairly common knowledge that Estonian tech companies are also looking towards other European markets when it comes to finding top talent.

How popular is relocation among Estonian tech companies and job-seekers?

Are companies and job-seekers open to relocating? 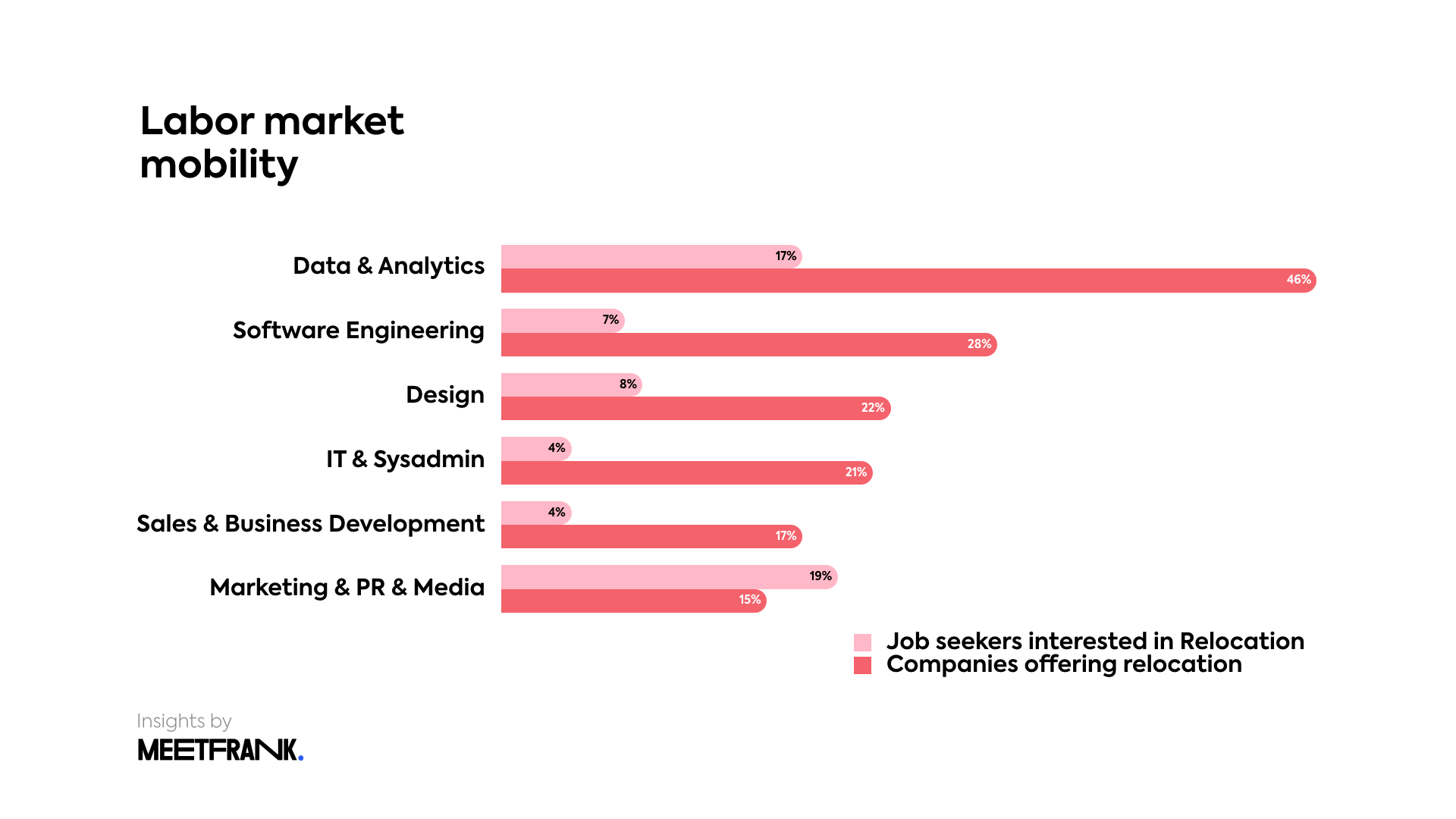 It turns out workers currently based in Estonia are, on average slightly less interested in relocation than the European average. This is the case for software engineering and sales & business development job seekers.

A curious case is IT & system administration, that has the highest % of interest for relocation (25%) while the field has the highest salaries of all top jobs in Estonia and the lowest level of competition. This is over 4 times higher than the European average (6%) for the role.

Sales & business development and data & analytics people are the most content in Estonia, with only 11% and 12%, respectively, interested in relocating.

Top 5 countries with applications to relocate to work in Estonia 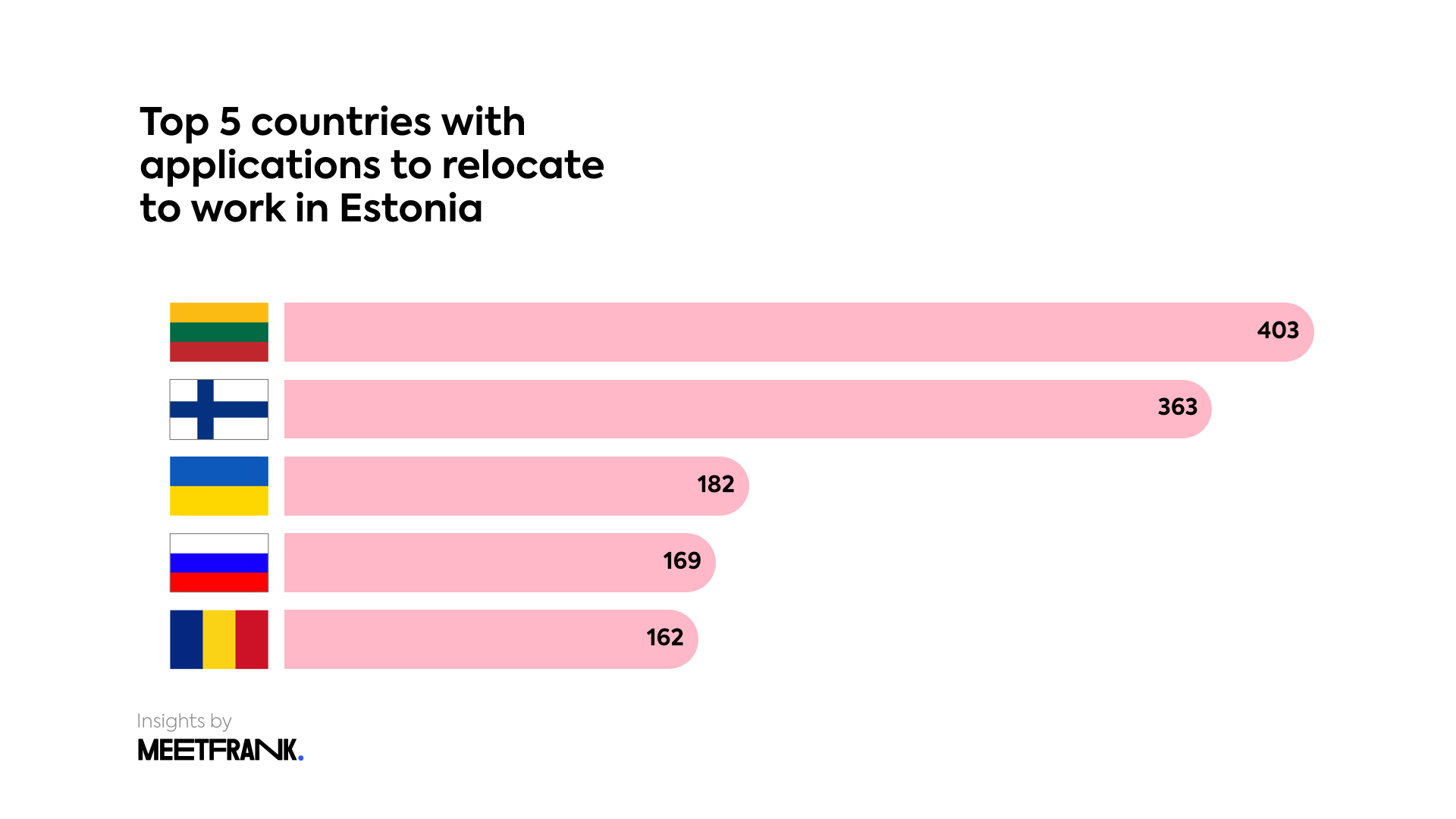 We know that around 25% of Estonian job-seekers are open to relocation.

But what about the other way around? Do people from other countries want to relocate to Estonia? The job-seekers in the MeetFrank platform seem to be willing enough.

Although Lithuania has an emerging tech scene of its own and the average payment is close to Estonia, it is surprisingly the country with the highest rate of readiness to relocate to Estonia. That is most likely due to geographic proximity. 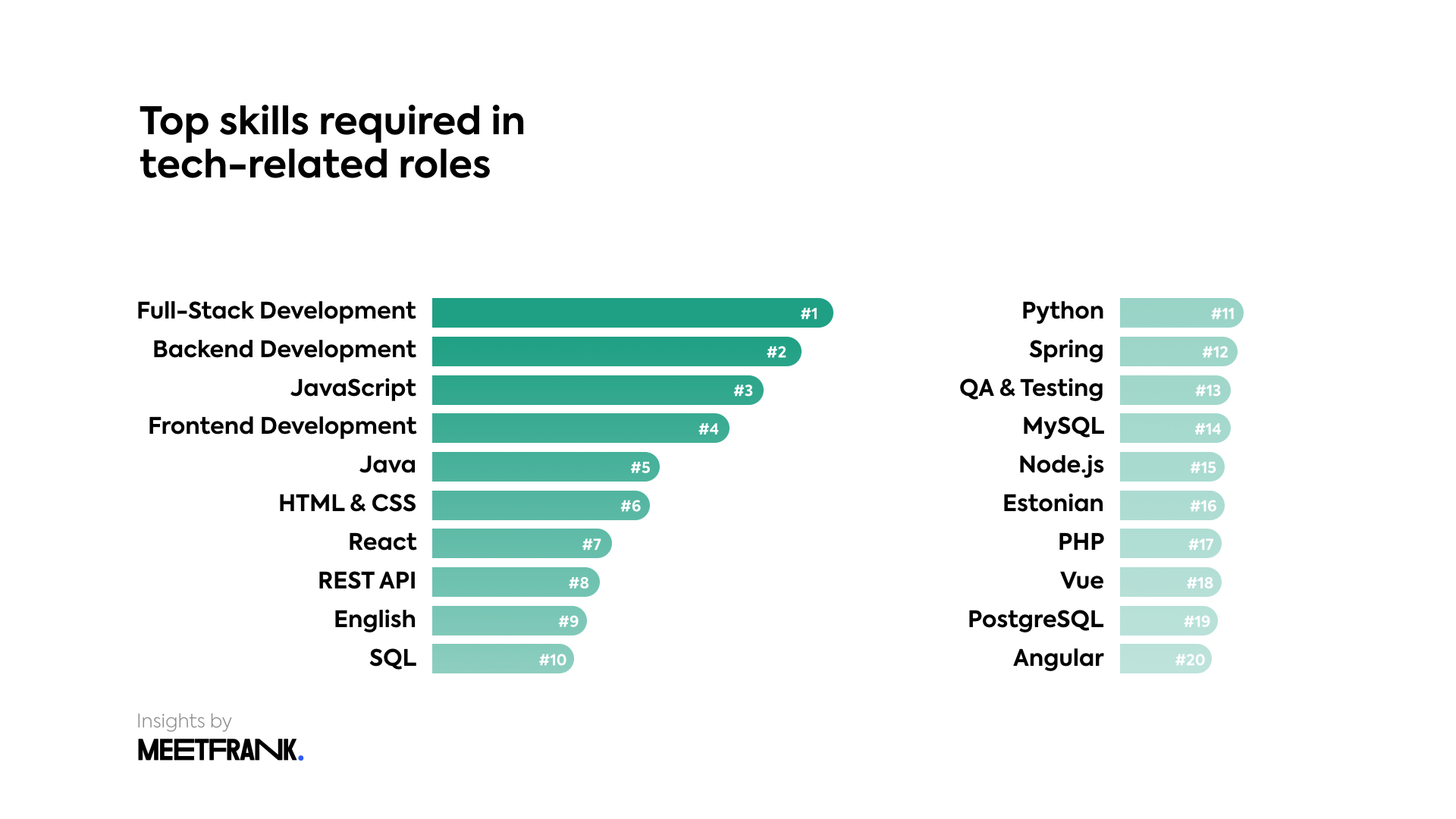 Let’s take a look at which skills make you most likely to get hired in the Estonian job market. At least in the MeetFrank app!

With software engineering being the most in-demand profession at the moment it shouldn’t come as too big a surprise that the top sought-after skills are regarding that field. Full-stack, backend and frontend development and most common development languages HTML & CSS, SQL and Javascript are what’s expected of engineers these days.

IT & Sysadmin candidates are currently most valued for their system administration and DevOps skills, while content marketing is the top skill expected from marketing & PR candidates. The most in-demand skill for designers is UI & visual design. 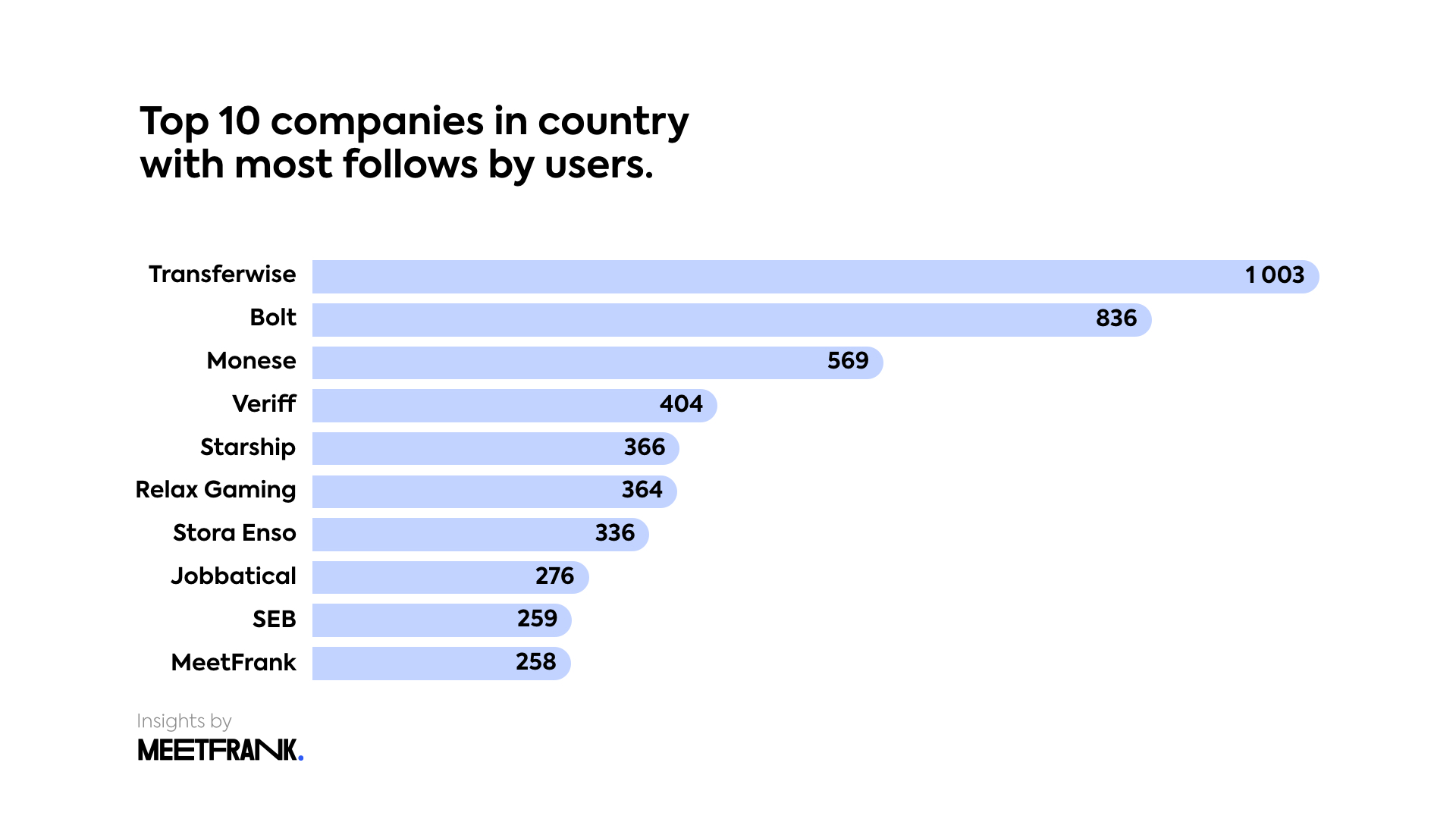 In the MeetFrank app, the most applied-to companies are the tech unicorns.

Out of the four unicorns ever be been nurtured in Estonia, two are hiring at MeetFrank being they are the country’s most popular companies. These are the low-cost money transfer service Transferwise and the ride-hailing platform Bolt (formerly known as Taxify).

The third is the mobile banking app Monese and fourth Veriff, offering safer face recognition service – one of the features that are vital for Estonia’s E-Residency project. Starship, founded by Ahti Heinla (one of the founders of the mythical Skype) is now working on packaging robots with Starship that is also currently hiring across people in Estonia and several locations in the US.

Estonia’s tech labour market, although comparatively small, is experiencing fast growth and offers a bunch of interesting companies to work for.

Several of them have recently grown to become international success stories such as Transferwise and Bolt, with many others boasting the potential to become the country’s next unicorns.

The average payment in the tech sector is slightly below the European average, but so are the prices in the country’s capital Tallinn, where most of the companies are hiring. The city embraces several tech hubs, a thriving startup community, having made it to the league of Europe’s top cities in terms of tech development and financing.

Want more? Read a similar overview of the European tech job marketing in 2020.